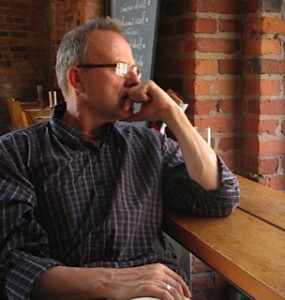 Hi, I’m Ken. Born in Toronto, Ontario, Canada in 1960, I spent most of my fairly normal childhood in Etobicoke, in a neighbourhood full of trees and kids. Towards the end of high school, I had what I called my “existential crisis”. Up until that time, I had been a devout Anglican boy, but one night, my sense of God disappeared completely. My whole orientation to life was shattered. I felt like an insect clinging to a large rock hurtling through space – no meaning, no magic, no purpose. This was a truly dark time that lasted several years.

After high school, I took a year off – worked in a warehouse, travelled through Europe for several months, and enrolled at the University of Guelph, Ontario. During this time, I read, drank, and partied a lot. Met great people. Had lots of adventures but was also suffering and profoundly off balance.

Eventually I started putting the pieces of my life back together. I landed a job as a bookseller at the Bookshelf (bookstore, cinema, bar, restaurant and dance club) in Guelph where I still am today. I met the Venerable Zasep Rinpoche, a Tibetan Buddhist teacher and eventually the love of my life Jacqueline. I’ve taken a several month pilgrimage to India, completed a thirty day solitary retreat in the Kootenays and do week long solitary retreats every year.

So my “sort of” credentials are that I have been a bookseller for almost thirty years, a student and practitioner of Buddhist meditation for twenty-five and a teacher in small meditation circles for about twenty years.

Around 2010, I found that I couldn’t teach anymore. So I stopped. After several months I started writing a book and produced about eighty pages but the writing wasn’t what I wanted it to be. At some point a friend suggested the idea of building a website and it stuck. After a year of envisioning and preparation, here we are, ready to begin.